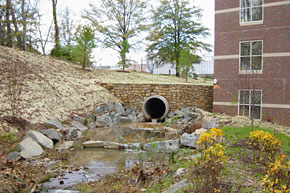 Stormwater management is now an integral part of our interaction with our environment. Increasing development and urbanization of our lands has led to changes in the natural environment that include increases in flooding, degradation of water quality, erosion, and sedimentation of our waterways. This in turn has led to measured impacts to the stream and riparian ecosystems including decreases in aquatic biodiversity and inability of the natural system to accommodate the full range of flows that occur from storms to droughts. To reduce these impacts, we are now implementing stormwater management plans in most urban areas.

Under natural conditions in the eastern United States, approximately one third of rainfall infiltrates into the ground to recharge groundwater, one third evaporates directly or is taken up by plants, and one third runs off the surface directly into the local streams. During periods between precipitation events, stream flow is maintained by groundwater discharging directly to the stream drainage network. 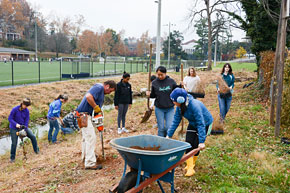 Help out by getting involved with UVA Clean Water

Development changes the natural conditions by creating large areas of impermeable surfaces, such as roads, buildings, and parking lots. The water that normally would infiltrate into the ground from the impervious areas runs off and enters storm sewers or streams. The increased runoff flows with higher velocity than normal runoff due to its increased quantity and lack of natural storage systems such as floodplains. The high velocity and quantity causes erosion and deepening of stream channels. The increased amount of water also causes problems with flooding as the streams are forced to deal with more water than they naturally would handle. During periods of no precipitation, the stream flow is decreased over natural levels because groundwater recharge was reduced by the impervious surfaces and that water was lost as direct runoff to the streams. In some cases, streams that naturally flowed all year completely dry up during long dry periods in the summer. In general, streams in urban areas see much wider variations between high and low flow conditions. 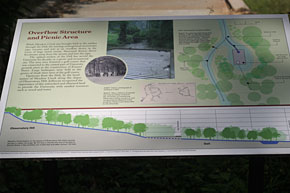 Contrary to the belief of some, runoff entering the storm drains along the roads and parking lots is not treated before discharging to rivers and streams. Any contaminants found on these impervious surfaces or from other areas draining into the storm drains, are washed directly into our streams and rivers. Common pollutants in stormwater include oil, grease, sediment, pesticides, fertilizer, litter, and pet waste. These are the same waterways that you may fish, swim, or boat in. Charlottesville and portions of Albemarle County rely on surface water for drinking water. Everyone should do their part to prevent stormwater pollution and keep our waterways clean.