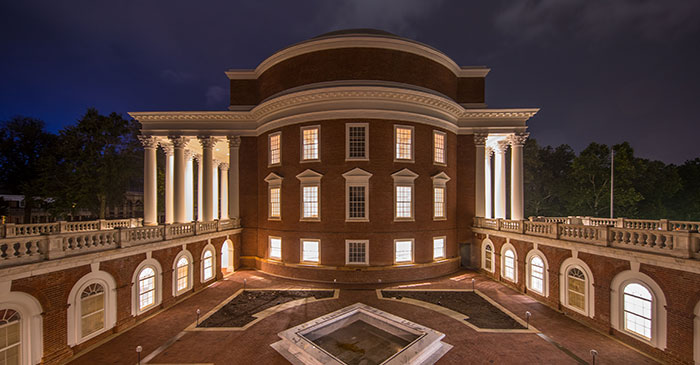 The renovations included extensive work on the building exterior and landscaping, as well as the interior. The exterior work included structural renovation and other repairs on the two porticos, roof replacement, replacement of the Corinthian column capitals, repairs to the column shafts and bases, and repairs to the two sheet metal cornices on the building’s main drum and other ornamental sheet metal. In the four wings of the Rotunda, the brickwork, marble balustrades, windows, and ceilings and columns of the connecting colonnades received an intensive cleaning. The terraces above the wings had their drainage systems repaired and then waterproofed.

The landscaping of the east and west courtyards and the north terrace were redesigned and rebuilt. Inside the building, mechanical, electrical, lighting, plumbing, fire protection, elevator, data, security, and audiovisual systems were all replaced. Mechanical space was increased to improve performance, serviceability, and energy efficiency. Interior alterations included replacement of the interior lining of the dome in the Dome Room and the addition of a stair to the lower gallery in the Dome Room. Also included were renovations to begin using certain spaces as classrooms and for quiet study.

Rotunda construction blog
The first of the new capitals from Carrara, Italy was installed on the South Portico on Feb 9th.

Rotunda Discoveries gallery
A photo gallery of some of the artifacts and architectural features that have been discovered during the project.

Faces Of The Rotunda
The highly trained and specialized artisans and craftspeople behind the renovation.

UVA Today – Rotunda Work Uncovers Clues To Its History
The work has yielded clues to its past, including how its original oval rooms were configured.

Daily Progress – New Rotunda Column Capitals Closer To Jefferson's Design
The new capitals were fabricated in Carrara out of the same marble as the originals.